Watching Knitwear in the Movies

You know you're a knitting geek when all you can do during a gripping, white knuckle film about four mountain climbers whose lives hang in the balance is to...look at the knitwear. As in, a climber is hanging from a single rope 3,000 feet up and may fall to his death at any moment and I'm thinking "Wow, his gray handknit knee socks are really nice!"

Okay, I'm exaggerating. The film was "North Face" and it is a German (2008) film set in pre-war Germany before the 1936 Olympics when there was (among other things) a national frenzy for climbers to scale the vertical North face of the Eiger. The movie is very well done and it subtly examines many of the relevant social issues of the time while documenting (somewhat loosely) a particular climb that took place in July, 1936.

But, whoever did the costumes for the movie selected several vintage handknits for the actors. Of particular mention, the lead actress wears a beautiful aqua pullover with lovely cables down the front and back and later wears a gray scarf all done in seed stitch. The actors who play the climbers wear the aformentioned gray knee socks with very nice cabling. They also wear handknit headbands and mittens, but those items are more run-of-the-mill. It was a little distracting to focus so much on the clothing, but it actually added to my enjoyment of the film. 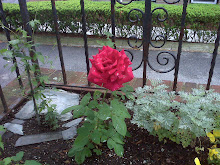